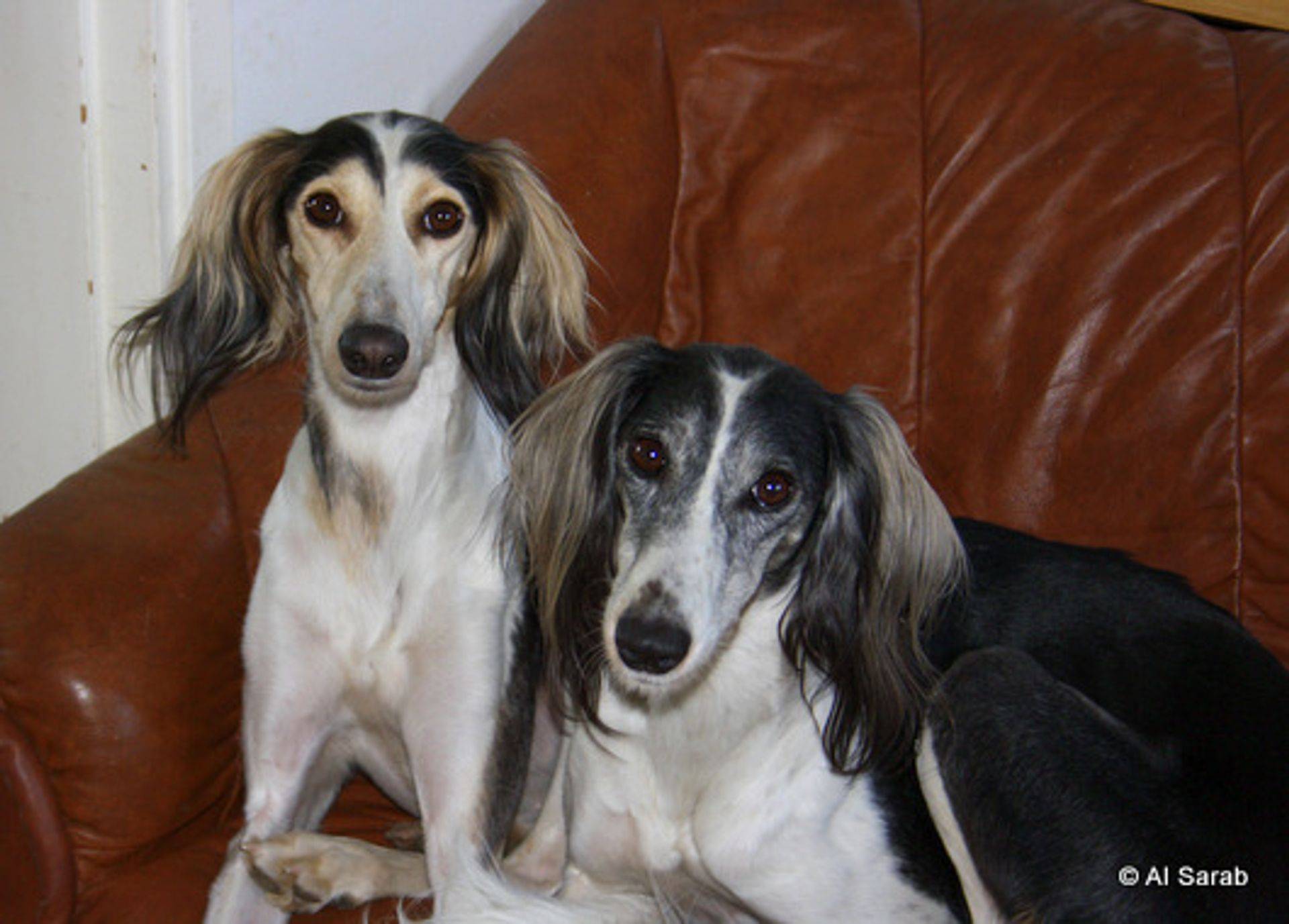 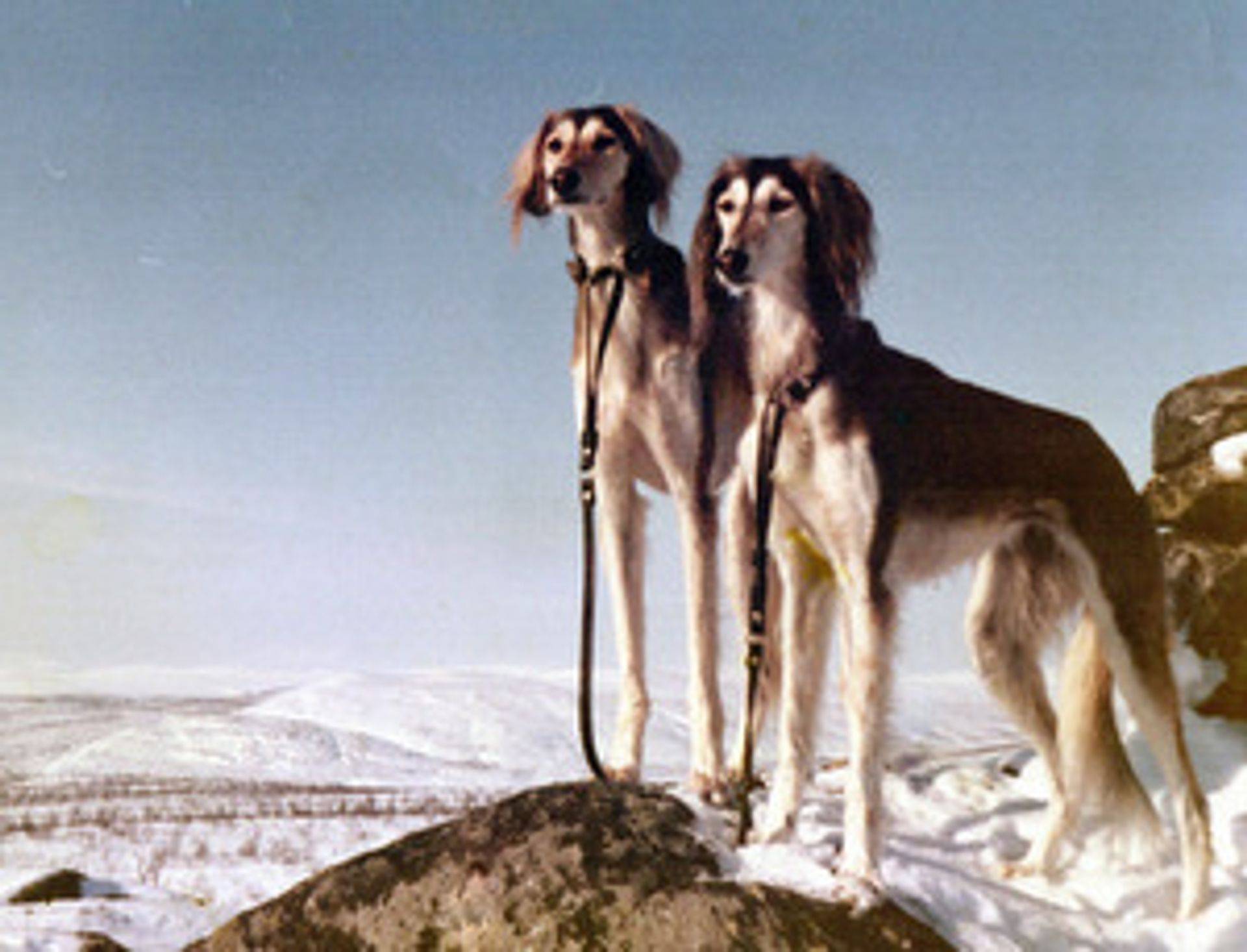 Berit (b. L?nnqvist) got her first saluki Sarab av Carbonata in 1965. In the 1960ies there were only around 50 salukis in Finland. Berit's co-student Ulla-Christina Andersin had a black grizzle saluki bitch by the name of P?rtbacka Eudoxia (born 1959, Farao of Kaukaj?rvi x Chadidja of Kaukaj?rvi). At the sight of that gracile being Berit was lost forever to the breed. The saluki reminded her of both cat and horse to its being, which appealed to her immensely. When 'Dockie', so she was called, later gave birth to five grizzle puppies, Berit became the happy owner of her first saluki 'Sara', who followed her like a shadow for 13 years.

Sonja (writing) was born in the seventies and ever since salukis have been a part of her life. I couldn't imagine my life without one, as they've always been there as my companions. It was probably destiny that I was going to be interested in breeding one day. There was no way out, I never "had a choice". Nevertheless I'm not too unhappy about it :)

The kennel name Al Sarab (arabic for "Mirage's") is derived from Sara's name and was registered in 1968 with the first living litter being born in 1970. For Sara's first breeding, Berit had chosen Kipa Meriläinen's wonderful black & tan male Faraji del Flamante. However there was only one puppy, a large male, that unfortunately had died by the time the C-section was performed. Sara's next litter in 1970 was sired by Hilkka Nousiainen's (Kirman), later very  famous golden male, Sadruk del Flamante (Asphodel Arabis x Firousi del Flamante). There were two male puppies born, of which Berit kept one, the grizzle Al Sarab Bahim-Sarif. In 1972 Sara was mated a third and last time, with Kirman Narri, which resulted again in one male puppy, Al Sarab Faruq.

Sonja with Sally as a puppy

﻿Due to lack of time in a family with three children, breeding was not continued after 1983 out Sally's puppies unfortunately. However the salukis continued to follow our lives.

Hannibal sired a litter at kennel Asarafi in 1993 by Asarafi Babuneh (El Hamrah Karachi-Khan x Ibinores Zarifa), which a.o. resulted in the cream male Asarafi Faijum who is found in many pedigrees in Scandinavia (through the Asarafi G- and Dyanitos E-litters), and our own bitch, golden female Asarafi Farah Diba that Berit picked from the litter.

Five months before Farah Diba was born, another female puppy, Shebnaz Shanzi (Shebnaz Shaman x Samoem's Shebnaz) had joined our pack, bred by Sari Uimonen. Shanzi was Sonja's first own saluki (on paper), with the sweetest temperament and a lovely gait. She wasn't shown in adult age due to an overbite. Farah Diba was a strong, beautiful bitch with wonderful movement and crazy about running. She had undoubtedly also carried on the early Al Sarab blood had it not been for her really shy and sometimes nervous character. However at home she was a wonderful companion and the most loyal saluki I have known. She had a strong presence and left a huge whole behind when she passed away.﻿

In 2004 a new era in salukis begun for us as Veronica Margelin of kennel Asarafi contacted us to find a home for a bitch that she wanted to import: the 7 month old Twisty Marsh Kajarah, bred by Kerstin Asplund-Danielson and a daughter of the famous Swedish stud Se CH El-Cazzino Cajar and out of Twisty Marsh Iallah (from two Irminsul parents). After some thinking we agreed, and the beautiful, gracile, very well behaved little gold/white particolour 'Lottie' arrived to us in the end of August that year. Farah Diba and Shanzi were already aged and would not live for very long after Kajarah came.

Nasima Al Amiir is the beautiful surprise (half)sister to Kajarah, from the Asarafi N-litter. Her first owner was not able to keep her, and Veronica contacted us to ask if we could take her. Nasima was an elegant, feminine, quite large beauty of 10 months, with an extraordinary charming and spontaneus character. And since she was close family to Lottie, how could we possibly resist. At the time we only had Lottie and old lady Shanzi. There was "plenty of room" for Nasima.

Both Lottie and Nasima were taken on temporary breeding terms and have had one litter each at kennel Asarafi in 2006 and 2007 respectively - the P- and Q-litters, which were to sadly to become the last litters of Veronica Margelin.

(Lottie and Nasima pictured above)

Prior to 2004 before Lottie and Nasima joined us, our salukis were rarely shown at exhibitions. Beginning that year though, showing and later lure coursing started to take up a lot of our, mostly my, spare time, as I discovered salukis can be also a wonderful hobby and a life style, apart from being "just" family members. Lottie has been a very co-operative companion in the ring and made it easy for me to start showing. Nasima has been a great saluki to course and track race with due to her infinate passion to chase the lure and of course hunting instinct, plus her very reliable temperament (she never had a single disqualification). Lottie and Nasima have both finished their Finnish Championship show titles.

In 2006 a beautiful red boy joined the pack - Asham from kennel Alflailawalaila (formerly Al Maysun) in Italy. Asham is dearly adored since the day he arrived and the proud leader of our pack. He is from the combination Pari-Was Ghazal-Gandhi x Simhearth Maysun bred by Riccardino DiMarino. Asham is a beautiful male with a lovely sound structure, who unfortunately never have given the best of himself in the show ring as he's not very fond of it and very stubborn. We have no doubt that he would have finished his championship, would he trot around the ring as he does around his property at home :)

Additionally there is a rescue-galga living at Al Sarab since 2009,  Bonita the tough and graceful, energetic and outgoing female. Our older rescue, Chico the humble-natured greyhound-galgo mix who came to us in late 2008 as a 5-year-old, we had to let go in august 2015 due to bad arthritis in his hips.

Asham as a puppy

After a long break,

Al Sarab continues a small scale breeding, now together with daughter Sonja, and inspired by our darling daughters of Cajar who we find have a lot to give to the breed in both structure and temperament. Lottie's second litter, our I-litter and the first one after two and a half decades at Al Sarab, was born in 2010 sired by Maymouna's Qaased Jatagan of old German + Iranian & Kurdish lines and resulting in 7 lively puppies. From this litter we kept two females, Ibis Izabel and Iatallah Sheicha, of whom Iatallah, we still hope, will continue the heritage - a beautifully simplistic, sound structured, small female with a sweet character.

Earlier we were also planning an own litter for Nasima but unfortunately this didn't happen due to the results of her heart-screens which were at first interpreted as early signs of dilateral cardiomyopathy, but later changed to possible endocardiosis (MVDD), diagnosis equivocal, but by now it was too late for her anyhow to have puppies.

We are located on the countryside in southern Finland, less than an hours' drive from Helsinki. Our hounds have a large fenced area to run in at home, and most of the year they can also run off-leash in the forest during walks. In September-October after the harvest they can stretch out on some fields nearby. When the numerous lakes in the area have frozen, these provide some ideal additional open space for walks during winter time (as long as you don't run into angry skiers :)

Functionality, soundness, a balanced temperament and sufficient genetical diversity are the main goals in our breeding.

Seeing the development of many "show saluki" lines of today, towards practically a different animal than the first salukis that were brought to the west, an unexaggerated structure with moderate angulations has become all the more important to us - a saluki in one, harmonic, beautiful piece, standing with it's legs underneath and moving with a light effortless gait carried by a strong topline, and who still has it's instincts relatively intact. This is why we also value the use of Country of Origin-dogs (full COO or some generations down), because their structure is still based on function in most areas, it's like turning back the clock a 100 years to look at them.

We don't breed more often than we can keep a puppy, so there will be around 3-5 years between litters. Please feel free to contact us for inquiries OR if you simply have questions about the saluki as a breed. Contact